Children from Meon Junior School have competed in a Junior Field Gun competition for the first time in Portsmouth.

The Armed Forces Day event, which took place on June 25, saw pupils from the school show the very best skill, stamina, resilience, and teamwork for the challenge.

They had six weeks to prepare for the day and were the only school in Portsmouth to take part.

Miss A. Faye, who cheered the students on while competing against Fareham’s Crofton Anne Dale School at the Portsmouth Historic Dockyard, says she’s proud of what has been achieved.

She said: “It was amazing to watch the children and to see everything they have reached in only six weeks. I am so proud of every single one of them, it was encouraging to see them having so much fun while doing Meon Junior School proud.

"Their families are so proud of their efforts and continue to cheer them on for more events into the future.”

The school had two teams within the contest – Meon’s Knights and Meon’s Dragons. Throughout the day, onlookers included local city councilors and the Portsmouth South MP Stephen Morgan.

The opportunity came about after Meon Junior signed up to Future Fit Junior Field Gun, which strives to keep Field Gun alive in schools, when they were approached to participate.

Miss Faye added: “Both of Meon’s crews are amazing and did so well. I decided to challenge schools in Plymouth for a race next June, for their Armed Forces Day, and they seem up for it.

“We invited Crofton Anne Dale to join us, and they have accepted. I’m hoping that we will see more Portsmouth schools forming their own Field Gun teams soon. It would be great to start a league within the city and encourage some friendly competition.”

Throughout the training, the children used thinking tools, such as reflective practice and critical thinking, to help them develop the best possible habits for success as a team.

Well done, Meon Junior, we can’t wait to support you at your next event! 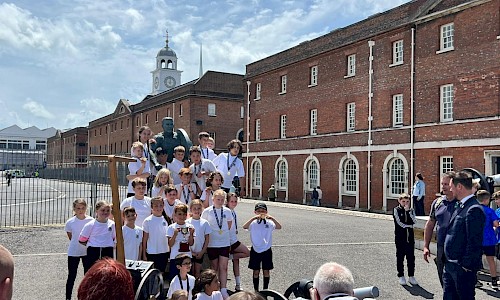